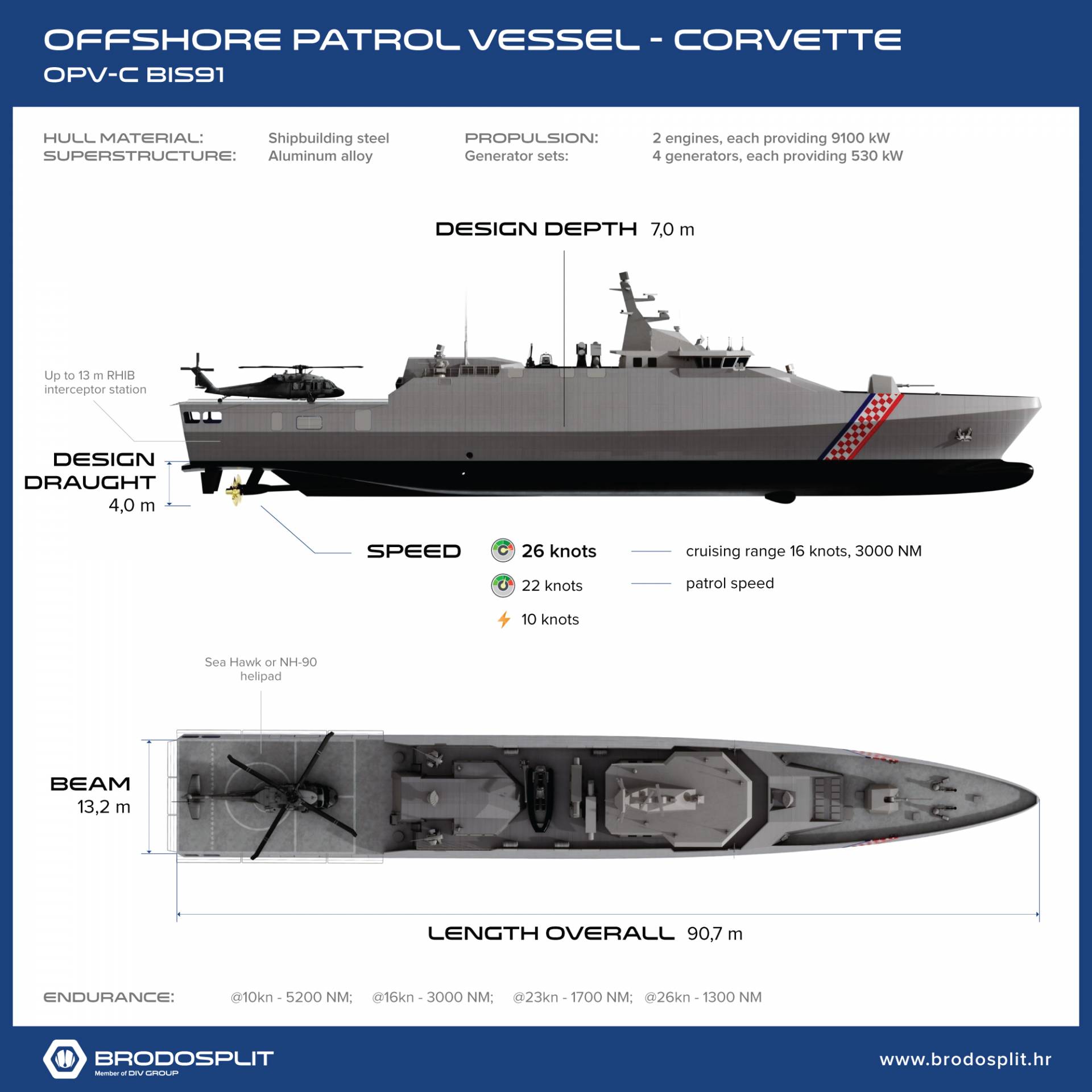 The corvette will be equipped with one intercept vessel up to 13 m long, intended for rescue and intervention, which will be able to reach a maximum speed of at least 40 knots, as well as accept and transport at least 10 people. The vessel will be lowered and raised by a fast stern ramp, at sea state not exceeding 4.

The corvette will be equipped with two cranes designed to load intermodal containers, supply cargo warehouses, and carry equipment for removing oil pollution from the sea. The corvette is planned to accommodate one naval helicopter (NH-90 or Sea Hawk) in collapsible storage on deck. Take-off/landing equipment according to NATO STANAG standards is also provided.

It is also planned to accommodate one unmanned aerial vehicle specialized for use at sea for reconnaissance and observation activities with the possibility of transmitting the recordings of the surface condition to the mothership in the areas where the vessel performs its tasks. The helicopter platform at the stern of the ship will also be used to operate the unmanned aerial vehicle.

To improve stability, vessels will be equipped with an active stabilization system. The corvette will be structurally prepared for the installation of additional equipment on both sides of the bridge deck.

The low silhouette of the hull and the compactness of the superstructure will have a beneficial effect on reducing the visual and radar visibility of the corvette. To reduce thermal visibility, the emissions of all diesel engines will be taken into the sea. To reduce magnetic visibility, i.e., the protection against magnetic and induction mines, the corvette will be equipped with an automatic system for compensating its magnetism.

Ship equipment includes mechanisms, devices, installations, systems, tools, instruments, and other systems that are assembled and delivered with the ship and necessary for proper functioning.

The propulsion system allows the following:

A bow thruster will be installed to improve agility. 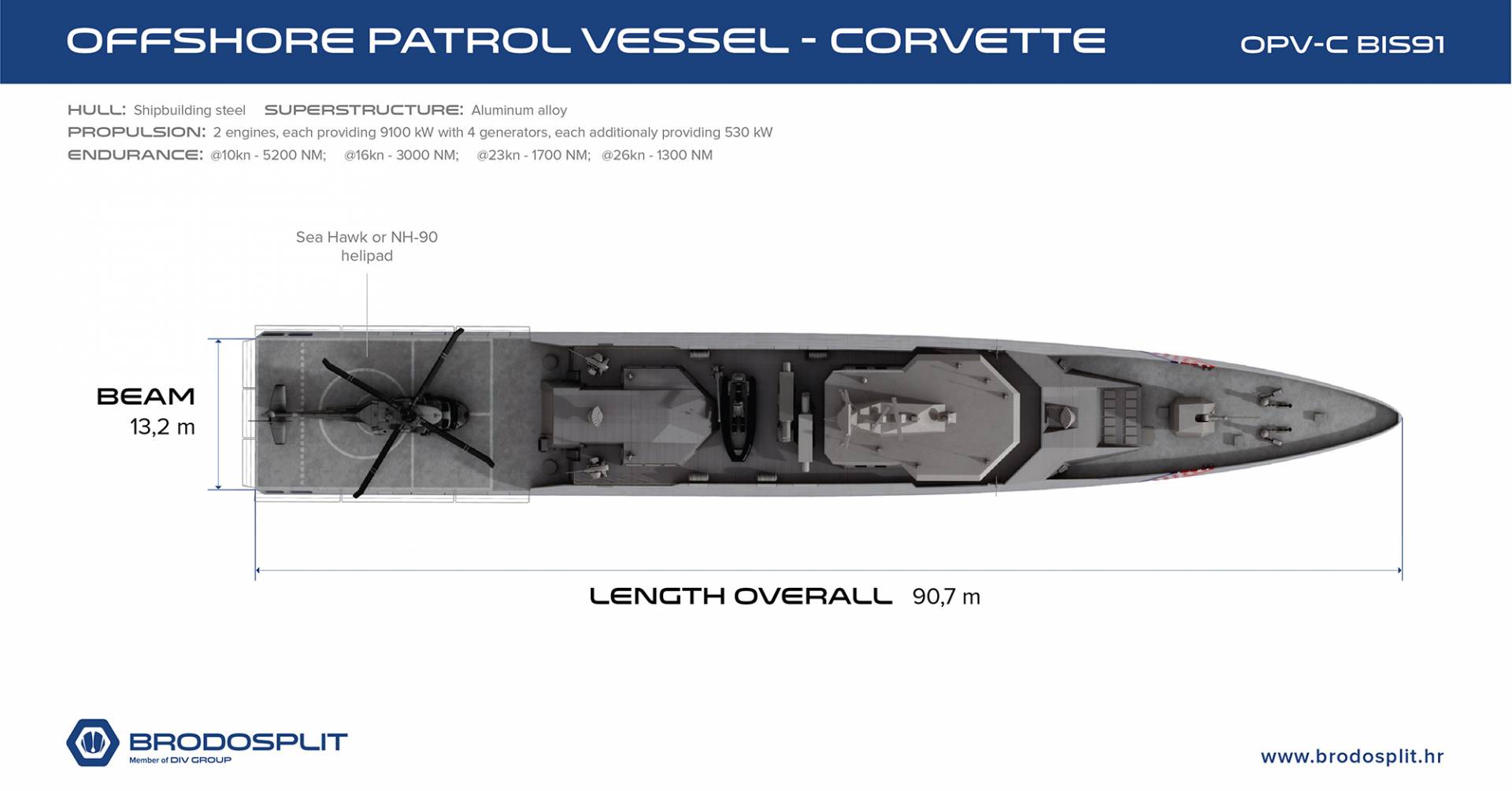 The corvette is designed for:

The corvette will meet the requirements of NATO STANAG 4154.

The corvette will be able to maneuver without the tug or other vessel at low speeds, especially when passing through narrow passages and canals and when mooring and unmooring with a wind up to Beaufort force 8, considering the resulting sea currents in the specified areas stated in 1.3.

The corvette’s maneuverability presupposes ensuring the maneuverability and stability of the course, the possibility of emergency stopping for safe navigation, and meeting maneuvering standards following IMO standards.

The corvette can reach the speed of 26 knots in the following conditions:

The corvette accommodates 71 crew members including:

The autonomy of the corvette is over 30 days with 71 crew members and support staff. The corvette will have secured containers for separate waste storage and packaging following the "MARPOL" convention.

The cruising range of the corvette is 3000 NM.

The arrival of the ship is 3000 nm in navigation at an optimum speed of 16 knots and assuming that 10% of the fuel remains in the tanks. 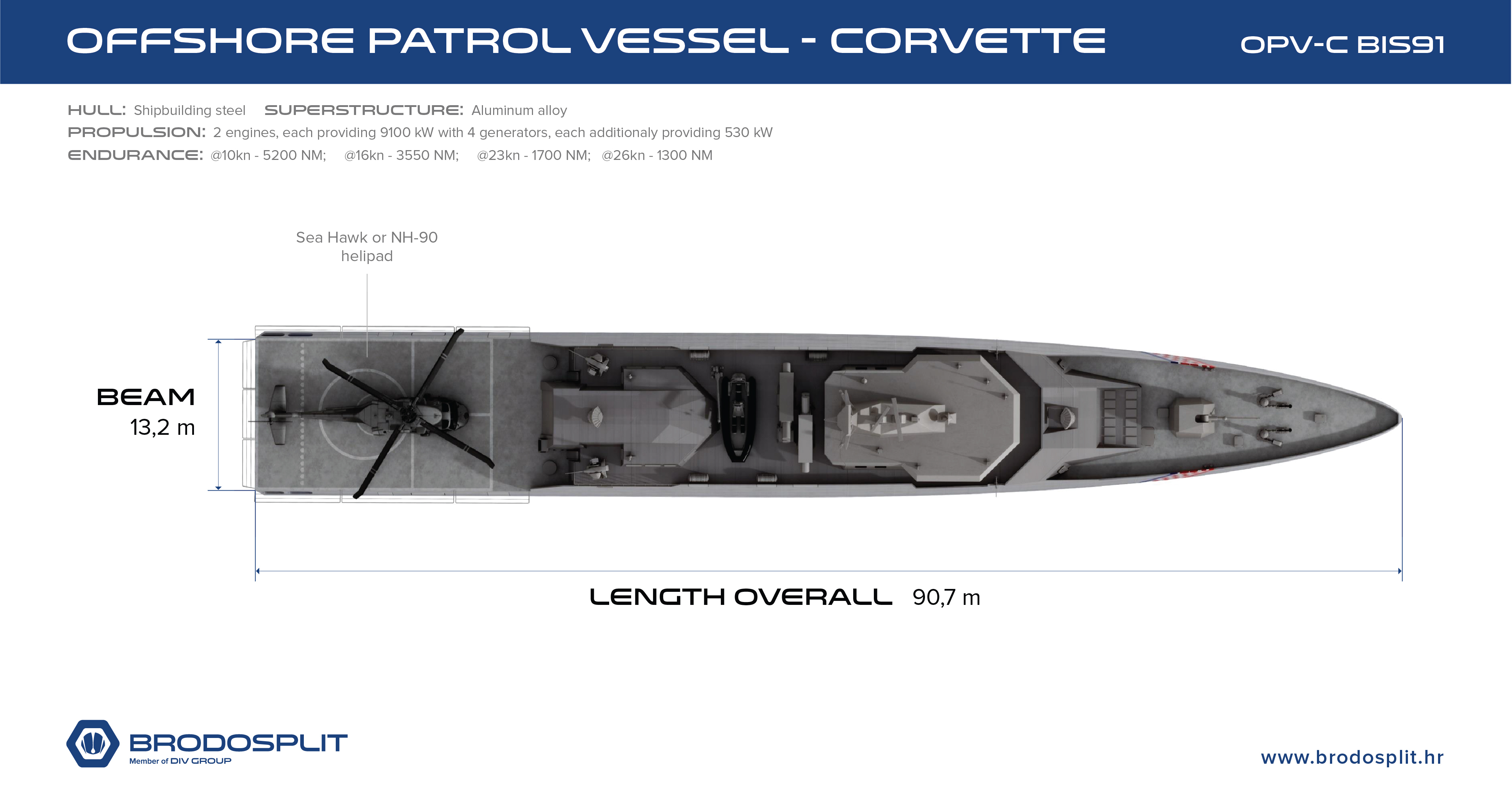 Corvette BIS 91 is designed as a multi-purpose warship performing general combat tasks that include artillery operations on the surface, air, and coastal targets, effective medium-range anti-aircraft combat, effective long-range combat on the surface and coastal land targets, anti-submarine combat, and close air defense of the vessel as well as defense against all forms of asymmetric threats.

The combat system for BIS 91 structurally consists of three segments, as follows:

BIS-91 is equipped with the following weapons system to perform all the necessary tasks in terms of combat operations:

The corvette’s sensor system required for the efficient use of the described weapons system consists of:

The CMS system is based on a fully open and distributed computer hardware and software configuration with all the necessary interfaces of the vessel’s sensor and weapon systems and the necessary operator panels for quality graphical presentation of the tactical air, surface, and underwater situation around the ship necessary for the analysis, situation assessment, acquisition, and monitoring goals, as well as making timely decisions on the action. The presentation part of the system (operator panels) is in the vessel’s combat operational center, while the necessary hardware devices (servers) can be placed in a separate room.

The core of the system consists of a console networked with the operator consoles of the sensor part of the system (3D radar, FCR + EOS) (also a bow cannon console), sonar, ECM, MASS-decoy) and operator panels of the remote-controlled guns to send an indication of the target that is a potential threat.

To be fully operable, the CMS links to the corvette’s navigation (radar, gyro, anemometer) and communication systems of the internal and external vessel’s connection.

Part of the CMS is a special gyro vertical (laser or fiber optic gyro (3D)), as well as a special anemometer (for calculating ballistic wind).